Why Do Women Live Longer Than Men?

It is a known fact that, in general, women live longer than men. All life expectancy calculations over the past years tend to show that females live several years longer compared to males, as a group (see figure 1).

There are several theories trying to explain this phenomenon and some concepts are better supported by research than others. This discussion refers to the rate of aging process in regard to gender and not to the individual perception of aging. In other words, it is about the biological mechanisms which may be causing men to age faster than women and not about how males or females may subjectively feel ‘old’. 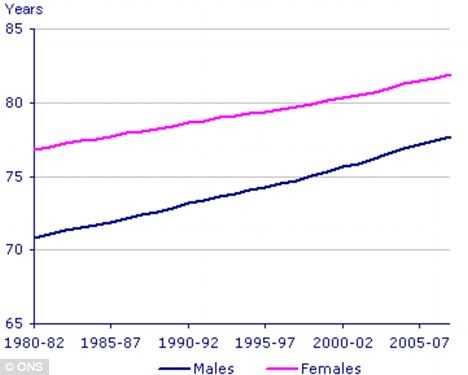 When we look at the death rate in men, a few facts are obvious. In young men, death is usually due to accidents, (as men tend to take more risks compared to women). In contrast, older men commonly die from age-related degenerative diseases such as stroke, heart disease and similar.

This makes sense and reflects life in the wild: men needed to be stronger and more muscular than women, in order to be able to deal successfully with the rigours of physical life, (accidents, fighting and manual work etc.)

We know that muscle growth and testosterone production are stimulated by a specific signalling pathway, known as the mechanical (mammalian) Target of Rapamycin –mTOR. So, in young men, mTOR seems to be beneficial as it makes them better able to survive, although we also know that in older men many aging signs may be accelerated when we enhance mTOR and these signs may be reduced when we inhibit mTOR. For example, an active mTOR pathway in older men may accelerate the risk of cancer, dementia and atherosclerosis, when at the same time; any agents that inhibit mTOR also delay these manifestations of aging. The point here is that the specific example of mTOR is indicative of ‘antagonistic pleiotropy’, when an expression of a gene or a factor may be beneficial early in life (assuring good function when young) but becomes deleterious later in life, (accelerating aging and risk of death) when strength and stamina are less relevant, following reproduction, (see figure 2). 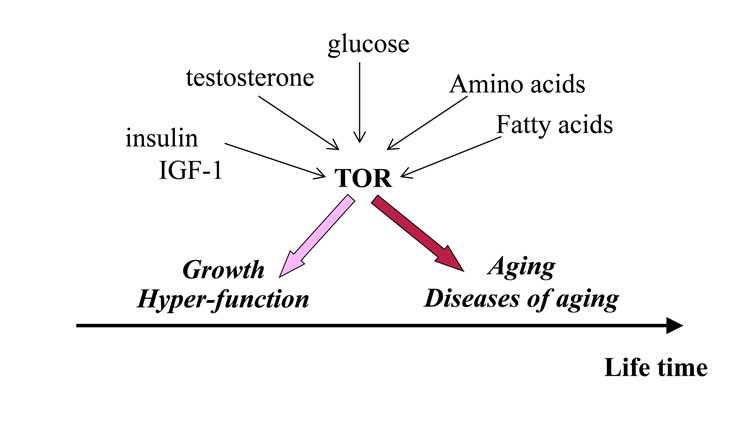 Figure 2: The relationship between testosterone, other compounds and mTOR with regards to aging vs healthy growth.

In this respect, two general aims may have practical relevance in clinical situations:

People who take supplements to modulate their mTOR function should be aware of this issue and act according to their age- this is why I always suggest that an expert physician should be involved in all cases of antiaging medication regimes.

Let me return to the case of testosterone. As mentioned above, testosterone improves muscle mass and strength in young men and it is up-regulated by mTOR, but a too high activity of mTOR contributes to aging (1, 2). However, the issue is complicated because we also know that testosterone increases muscle mass in frail older people too, so it can be used to improve physical function in later life (3). This is also true of other androgens which protect against cardiovascular disease and other chronic conditions (4). On balance, it seems that certain people could benefit from testosterone supplementation in later life, while others could not (5), so it is important to involve an expert practitioner in choosing suitable products and monitor the blood levels of the different hormones.

In a study, administration of deprenyl in laboratory rats resulted in an increased sperm count and high levels of testosterone (6). This aligns well with the discussion above, which may suggest that high testosterone in young life is beneficial, whereas it becomes less relevant in older life. The value of deprenyl supplementation has been shown in several experiments involving older men too (7) so it may be that deprenyl has several modulating effects: valuable both in the old and in the young, but acting through different mechanisms in the different age groups (8).

An interesting study sheds some light (and poses many questions!) with regards to the function of metformin and longevity in men. The authors found that metformin causes significantly more health benefits in women compared to men (9). The point here is that women may react differently to the same substance compared to men and the reasons for this are unknown, although it is tempting to speculate that there is a hormonal link. In this study, the antidiabetic effects of metformin were more pronounced in women than in men. If metformin has any life prolonging effects, (see the TAME initiative) then these may be related to the gender of the patient, as well as to their age. It would be interesting to see if women treated with metformin live longer than men treated with it. So, there is a definite interplay between age, gender, and metformin (which is also acting as an mTOR modulator- figure 3). 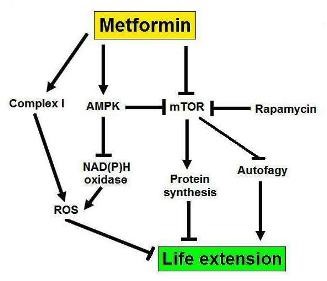 Figure 3: A possible mechanism for the life extending effects of metformin, involving mTOR.

We know that aging is strongly related to reproduction. Many natural mechanisms ensure that prolonged or enhanced reproduction also means early aging, (see figure 4) and the rationale of this is well explained by the ‘disposable soma’ theory (10). 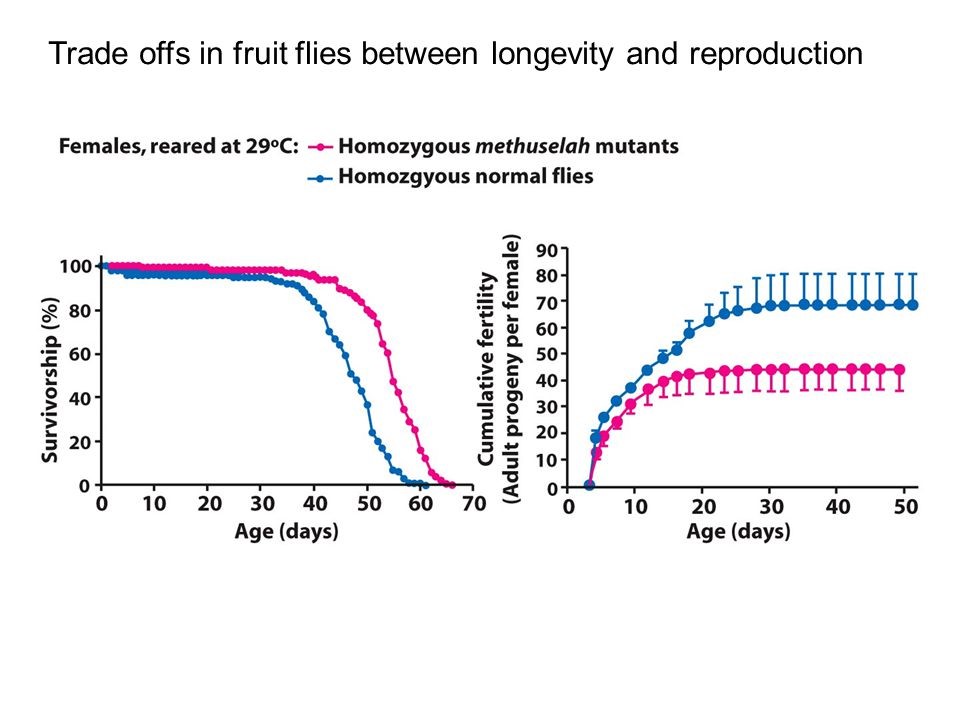 Figure 4: A study of longevity and reproduction in flies: Flies in the red group live longer than those in the blue group (left graph), and also have less offspring (right graph).

Therefore, it follows that shorter periods of reproduction are associated with a slowing down of aging. Men are able to reproduce for longer but their lifespan is reduced, whereas women, who stop reproducing by middle age, live longer. This may reflect an underlying law of nature which states that: Life must continue – so you either:

This hypothesis is supported by the fact that eunuchs, (men without testicles) live generally longer than other normal men. In some cases up to 14-19 years longer (11). These comments are very simplistic but they carry the general point I want to make. If you are interested in this subject you can read articles which examine the issue in more depth (12) and my research (13).

Among one of the theories proposed in order to explain the gender differences in longevity is the “jogging female heart” idea – the idea that a woman’s heart rate increases during the second half of her menstrual cycle, offering the same benefits as moderate exercise (even though the woman is not actually exercising). The result is a delayed risk of cardiovascular disease later in life and an increased overall longevity. In a relatively old paper, the authors report that endogenous estradiol can affect the heart rate and increases cardiac output by 20% during the second half of the menstrual cycle (14).

This is comparable to the physiological effects of exercise and so young, menstruating women may have an added benefit: an improved cardiovascular health without the need to exercise as much as men need to.

One possible or speculative reason why women live longer was recently put forward by researchers who studied sex differences in the gut of fruit flies. They found that there are differences in stem cell function between younger and older flies and also between female and male flies. While females are resistant to intestinal damage, males are not, but this is balanced against an increased malfunction of the gut in females (see figure 5). 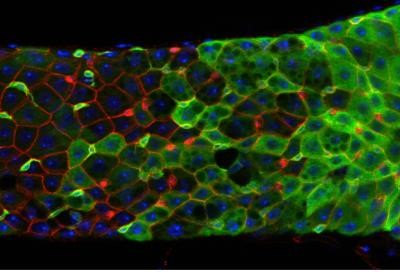 In other words, females live longer but spend that extra time suffering from dysfunction, whereas males live shorter lives without much dysfunction (15). This shows that there is always a balance between actions: when there is a benefit in one area, there is a counterbalancing damage in another. This general concept has also been shown true in human subjects (16).

The mechanisms involved in the increased longevity of females give us some insights into developing strategies (such as a judicious use of certain compounds) which may enable us to enhance our changes of a longer and healthier life, whether we are males or females.