The thymus gland is small in size, weighing no more than 1.5 ounces and is located in the upper region of the chest. Its importance in the regulatory function of the immune system was recognised in the 1960’s, when thymus gland removal in animals resulted in a distinct and progressive depression of the immune system and when left unchecked, usually resulted in the death of the animal from an uncontrollable infection. However, when thymus tissue was reimplanted into such animals, partial or complete recovery took place.

Important insight was gained from experiments with thymectomised animals in which, instead of a new thymus implant, an infusion chamber was implanted, (which did not allow cells to pass through). When thymus tissue, or a cell free thymus extract was placed in these chambers, the immune system function of the animals also improved. This helped to prove that water soluble thymic substances, not associated with intact thymic cells, can considerably influence immune defense (1).

Later research demonstrated that the thymus gland produced a family of specific immune-regulatory polypeptides, known collectively as thymic hormones. It is also been shown that other organs (i.e. the spleen), also synthesis similar peptides (2).

The precise mechanism of the action of these thymic peptides has still not been fully elucidated. There is however, no doubt that the involution of the thymus gland, which starts very early, often at puberty, is associated with a decrease in thymic function and a weakening of the immune defense system in elderly individuals (3, 4). 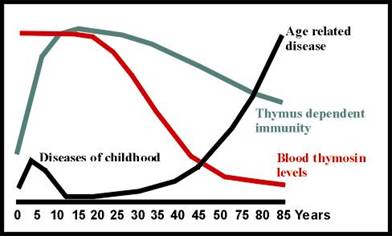 It is also been shown, that thymectomy in older persons, accelerates in a lasting manner, the age related decrease in the immune system (2).

Furthermore, thymus hormones are known to reduce autoimmune reactions and help to prevent bone marrow injury, by assisting the production of white and red blood cells (5).

Meanwhile, whilst thymus hormones increase antibodies where they’re needed, they have also been shown to be able to reduce the levels of the “allergy antibody” IgE, thus having benefits for patients suffering with allergies such as allergic rhinitis, asthma and atopic dermatitis etc. (5).

This may help to explain some of the anabolic changes seen in patients who are undergoing thymus hormone supplementation, certainly it is noted that when the thymus gland is removed, it is accompanied by a degeneration in pituitary cells (2) with a resultant catabolic action.

However it has not been shown that one can isolate a single thymic hormone with the whole complex of functions of the thymus gland. It would rather appear that single isolated molecules carry out single psychological functions, (e.g. T-cell differentiation), but not other functions. For this reason, it is still considered appropriate to produce and administer a natural, complex mixture of extracted thymus hormones, capable of comprehensive modulation and stimulation of immune defenses.

The Germany company Strathmann AG, have a long-established product called Thym-Uvocal ®, which is known to be an effective whole and natural thymus hormone agent, that is very well tolerated, with impressive actions in those disease states associated with impaired immune defenses, including “old age.”

Thym-Uvocal ® is not just a desiccated whole thymus glandular extract, of the type found in health food stores. The active substances in Thym-Uvocal ® are obtained by a selective, multi-stage biotechnology process. The starting material are thymus glands from strictly selected and healthy calves, raised in Australia.

Tissue from any given animal is only used after a veterinary physician has examined the live animal and issued a certificate of good health. Before the tissue is processed, histological and bacteriological tests are performed. During the multi-stage processing, proteins and prohormones in the tissue are enzymatically cleaved to short-chain pharmaceutically active oligopeptides.

Then filtration and special heat treatment ensure the inactivation and removal of any microorganisms. The controlled and reproducible manufacturing process produces an activation and concentration of the desired low molecular weight peptides.

It is interesting to note, that Thym-Uvocal ® has been used clinically in Europe since 1976 and still represents one of the finest thymic supplements available anywhere on the world market today.

Thym-Uvocal ® has been administered along with treatment, and has reduced side-effects, with no interactions or contraindications being reported to date. Many physicians have also reported improvement in the underlying disease, with regression of existing tumors, a delay in metastasis and better remission times (13).

Possible positive effects on the underlying Cancer disease with Thym-Uvocal ® include:

In the area of rheumatic disease, Thym-Uvocal ® can being about subjective and objective improvement, leading to both a reduction in inflamed joints and reduction in the number and severity of painful joints (shown in figures 2 and 3).

It is assumed that the combination of active substances has a positive immunomodulating effect on the autoimmune processes. Our attention here is focused upon patients who cannot tolerate the usual doses of nonsterodial drugs used in rheumatism, or in whom such drugs no longer have the desired effect. Administration of Thym-Uvocal ® can make it possible in many cases to decrease the effective dosage of nonsterodial anti-inflammatories, and/or prevent a switch to steroids.

The possible improvements in rheumatism with Thym-Uvocal ® include:

Both specialists and general practitioners very often report astonishing objective improvement in their patients. This has included less disability, better mobility and reduced swelling of the joints. Frequent reports include the ability of Thym-Uvocal ® administration to allow lower doses of nonsterodial anti-inflammatories, and that long term use has allowed them to wean rheumatism patients off steroids (11). 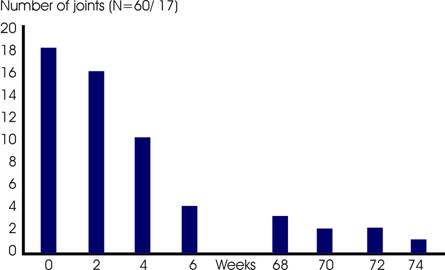 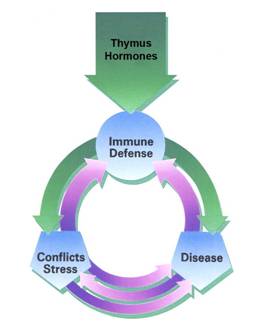 Immunoincompetence can result from disease and vice-versa. Some drugs can treat disease, but weaken the immune defense systems at the same time. Physical and psychological stress can cause disease directly, or do the same indirectly by causing immunoincompetence, (see figure 4).

As is shown in figure 1, there is a close correlation between decreasing thymic activity, worsening immunocompetence and increasing susceptibility to disease as we grow older. As it is known that blood thymus levels decline after the age of 25, this helps to explain why older individuals are the most important group for supplementation with thymus, yet the thymus gland is virtually completely overlooked by mainstream medicine, even by some in the field of endocrinology! There is no doubt that the thymus gland appears to be the most forgotten about gland in medicine today!

Yet, because of the immune stimulation induced by Thym-Uvocal ® supplementation, it has been applied for a number of different indications which all involve immune system decline. These include infections, (viral and bacterial), internal medicine, allergies, states of exhaustion (chronic fatigue), Aids, Cancer and arthritic disorders.

An interesting comment was made by biochemist James South MA, who noted in his article; “the overlooked but vital role of the thymus” (12), that in addition to its immune enhancing properties, the personal use of Thym-Uvocal ® for himself and his wife, induces a state of “well being” and has “vitalizing” effect on them both.

The dosages depend upon the need, and vary from 1 capsule (240mg each) twice a day, to 2 capsules three times a day. Its effects can normally be noted within 3-7 days, side-effects are very rare and to date no known contraindications have been reported. 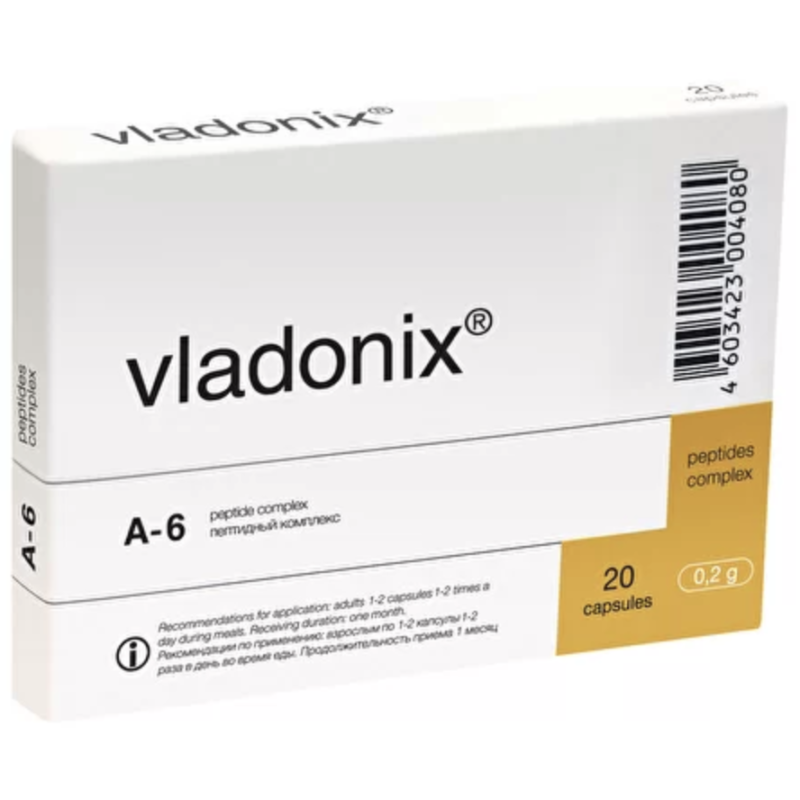