REPORT on the results of clinical study of peptide bioregulator Taxorest

The Director of the Medical Center

of Saint Petersburg Institute of Bioregulation and Gerontology, corresponding member of the Academy of Sciences, professor, Doctor of Medical Sciences

Biologically active food supplement Taxorest contains a complex of low-molecular peptides with molecular weight up to 5000 Da, isolated from bronchial mucosa of young animals – calves up to 12 month of age or pigs.

Taxorest is manufactured in the form of capsules with active substance content of 10 mg.

Experimental studies have shown that peptides have tissue-specific action on the cells of the tissues they were isolated from. Taxorest peptides regulate metabolism processes in the bronchial mucosa cells, improve their safety margin, have a favorable effect on organism adaptive capabilities in extreme conditions, possess antioxidant properties, regulate peroxidation processes in the bronchial mucosa tissues. Thus it can be expected that Taxorest is efficient for restoration of respiratory system functions at their disorders of various genesis, including decrease in bronchi spare capacity at ageing.

Drug treatment of the chronic bronchitis includes administration of the following medicines (1, 2):

Clinic characteristic of the patients.

Clinical study of Taxorest application efficiency was conducted at the Medical center of Saint Petersburg Institute of Bioregulation and Gerontology during the period from April till November 2011.

The study included 52 patients at the age from 35 to 73 years, including 35 men and 17 women with chronic bronchitis in remission phase. The patients were divided into 2 groups. Patients of the basic groups were administered with Taxorest in addition to the general therapy – 1 capsule 2 times a day at mealtimes for 30 days.

Patients of both groups have been complaining of moist cough, mostly in the morning, general weakness, sweatiness, dyspnea at physical load, periodic asthma attacks, sleep disturbances, headaches. All the examined patients were smokers.

It was established that administration of Taxorest in addition to the general purpose therapy to patients with chronic bronchitis in 82% of cases resulted in health improvement, decrease in cough frequency, asthma attacks and reduction in the amount of sputum.  Positive dynamics of subjective parameters in the control group was registered in 57% of patients.

Dynamic lung auscultation was indicative of a decrease in dry sibilant and buzzing rales.

During the period of Taxorest administration a decrease in the number of microscopic sputum structures was observed: leucocytes, epithelial cells, Curschmann’s spirals, which is indicative of a decrease in inflammatory and bronchospastic signs of the disease.

Examination of the respiratory function has shown that the Taxorest treatment has resulted in improvement of bronchial conductance (table 1).

* р<0,05 – in comparison with the index rate before treatment.

Results of the respiratory function examination were indicative of compensated pathological process in the lungs, but at the same time there were signs of bronchial conductance disorder, mostly due to spasm of the small bronchioles. Administration of Taxorest had positive influence on the dynamics of the process.

Thus the results of the study performed are indicative of the treatment efficiency of Taxorest and expediency of its administration for complex treatment of chronic bronchitis, including smokers cough.

Taxorest administration did not result in any side effects, complications and drug dependence.

Taxorest can be used for medical and preventive purpose as a biologically active food supplement combined with any means of symptomatic and pathogenetic therapy used for chronic bronchitis treatment.

Taxorest is well tolerated at oral administration, has no side effects and can be used as treatment-prophylactic biologically active food additive.

Taxorest is recommended for patients with respiratory dysfunction, including chronic bronchitis of various origins, per os at mealtime 1-2 capsules 2 times a day for 30 days.

A repeated course in 3-6 months is advisable.

Taxorest is a complex of peptides, received from bronchial mucosa of young animals.  The isolated peptides have selective effect on the bronchial mucosa cells, normalize their metabolism and regulate respiratory system functions.

The clinical study has helped to establish the efficiency of Taxorest for complex treatment of patients with chronic bronchitis of various origins, restoration of the respiratory system functions after diseases of various origins or after exposure to extreme environmental factors, hypoalimentation, and at ageing.

Taxorest should be taken per os at mealtime 1-2 capsules 1-2 times a day.  The period of administration makes 30 days.  It is reasonable to have a repeated course in 4-6 month.

Administration of Taxorest has not resulted in any side effects.

Pharmaceutical form: 20 capsules or tablets of Taxorest 10 mg each.

Period of validity – 3 years from the day of manufacturing.

Normalizes the function of the Lungs 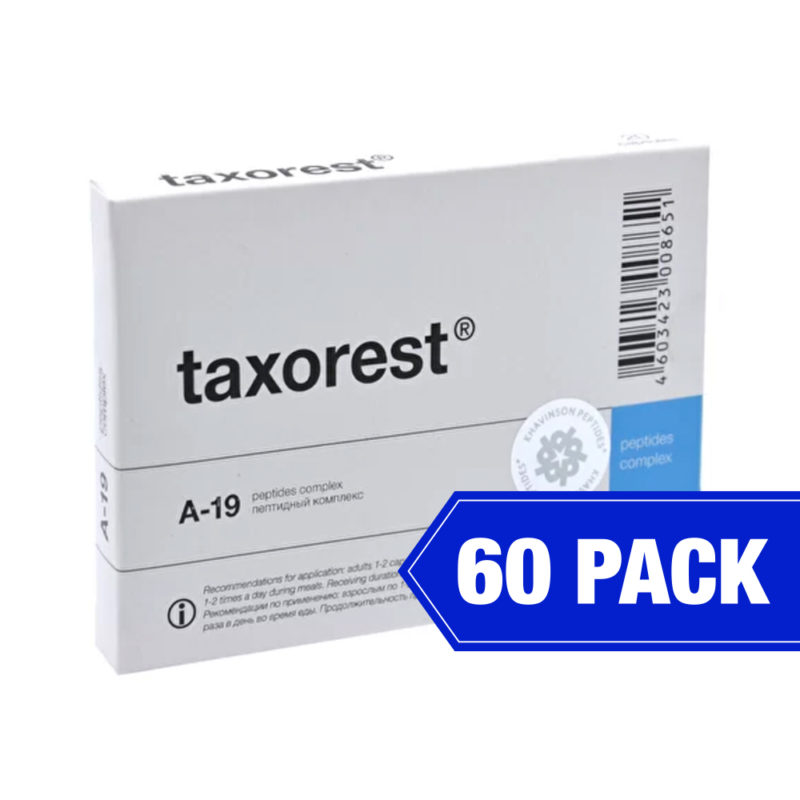 Normalizes the function of your lungs

Normalizes the function of the lungs