This is the second of a three part article where Dr Eccles looks at the scientific evidence for the effects of static magnetic fields on human health. There is much contemporary reference to their use in pain relief but in Part 3, Dr Eccles will discuss an exciting development in non-hormonal menopause symptom relief and the evidence for their use in promoting wound healing.

The debate on physiologic influence of biomagnetism has been somewhat re-awakened by more recent epidemiological studies (Jauchem & Merrit, 1991; Milham, 1982) analyzing cancer deaths in relation to electromagnetic field (EMF) exposure. A small but significant relation between occupational EMF exposure and leukemia was reported by Foster in 1992. Other studies have reported of other health risks such as male breast cancer, chromosomal abnormalities and several other health hazards (Michaelson, 1987). A number of important studies have concluded a small but significant relation between childhood domestic EMF and leukemia (Savitz et al, 1998). The general concordance of these results has led many investigations to re-visit the EMF problem.

Geomagnetic storms are associated with an increase in the number of cases of myocardial infarction (Brecus et al, 1995; Andronova et al, 1982). Small mammals and humans deprived of natural geomagnetic oscillations suffer ill-health (Wever, 1973). The dysregulation of these natural fields by technological devices emitting artificial fields and radiations have been reported to have adverse effects on health (Wertheimer & Leeper, 1979; Savitz & Wachtel, 1988; Hardell & Holmberg, 1995). Electromagnetic fields have been shown to alter EEG signals, alter DNA synthesis, reduce melatonin synthesis, reduce immune response, increase messenger RNA transcription rate, alter enzyme activity and influence the blood-brain barrier. Conversely, positive effects on health have been described of magnetic fields of only a few hundred nanoTesla with frequencies in the range of 7 to 8 Hz.

If, indeed, high-energy electromagnetic fields can disrupt human physiology it perhaps challenges us to wonder if more subtle magnetic fields could have a health enhancing effect. We should, rather than being dismissive, examine more carefully the potential interaction of magnetic fields with the body’s biorhythms. Maybe our ancestors were stumbling on something that could be of immeasurable benefit to us both now and in the future.

The public acceptance of magnet therapy (and CAM therapy in general) far outweighs its acceptance by the medical community. We live in an era where evidence-based medicine is vogue. By this we mean evidence of effectiveness or benefit over and above ‘the placebo’. As with all treatments it is important to know that they are efficacious but also that they are safe. The Japanese have used magnets for years to treat chronic fatigue syndrome and have suggested that an increase in environmental electromagnetic pollution and/or progressive inability to be energized by the Earth’s magnetic field (Rosch, 1998) is important in its aetiology. The Yellow Emperor’s Canon of Internal Medicine, some 4,000 years ago, also talks about stones and heat and magnets working over acupuncture meridians. In the last two decades the Japanese have been using magnets to relieve pain.

There is little doubt that oscillating electromagnetic fields can relieve pain and inflammation but static magnets produce motionless magnetic fields and until recently there have been very few studies of the efficacy of these fields in pain control.

There are many anecdotal reports of effective pain relief from static magnets from users including athletes (White, 1998) and physicians (Weintraub, 2000) and unpublished reports of increased healing and reduced pain by physicians (Barnothy, 1964; Henren, 1997; Ruibal, 1997). In 1938, Dr Hanson reported pain relief on himself after application of a static magnet. Estimated worldwide profits from sales of static magnets exceed $5 billion annually. A quest for analgesia would appear to be a major part of these sales and it is hard to believe that devices that were ineffective could sustain this level of turnover. After 2,000 years of deliberation, the jury is still out.

In the US a bone growth stimulator, which works by electromagnetism, has an 80 percent success rate in promoting the union of non-healing fractures and has FDA approval (Bassett et al, 1982). A similar device has also been approved for aiding female incontinence (Galloway et al, 2000). Armed with this information one would have expected a huge interest in the potential further applications of electromagnetic fields to promote healing in other clinical situations but this field does not appear to occupy a significant proportion of medical research. Most early research on magnets took place in Europe but the research in North America is now expanding.

The author’s clinical experience has involved a wealth of positive feedback from individual patients, some of whom have had chronic pain syndromes, but more significantly authorship of a review of the published, double-blind, placebo-controlled trials and direct involvement in two controlled trials (Eccles & Hollinworth, 2005; Eccles, 2005, Journal of Alternative and Complementary Medicine). I have also been involved in directing several surveys of randomly selected users of specific static magnetic products. These have led to the following conclusions.

The majority of the better quality, randomised, control studies, 73.3 percent, demonstrate an analgesic effect of static magnets. Analgesia seemed to be elicited across a broad variety of types of pain including neuropathic, inflammatory, musculoskeletal, fibromyalgic, rheumatic and post-surgical pain. None of the studies reported any side effects with magnets. The weight of evidence from this critical review suggests that static magnetic fields can elicit an analgesic effect (Eccles, 2005). Not included in this review was a very recent publication in the BMJ demonstrating that magnetic bracelets relieved the pain of osteoarthritis of the hip and knee (Harlow et al, 2004).

A double-blind, placebo-controlled study of a product called LadyCare, a specially designed, static magnet for dysmenorrhoea (period pain) [see Fig 1] demonstrated a significant reduction (p< 0.02) in pain in the LadyCare group compared to the placebo group, with the majority experiencing at least a 50 percent reduction in pain levels. A reduction in irritability symptoms in the LadyCare group approached statistical significance (p=0.056). No side effects were reported [Eccles, 2005]. 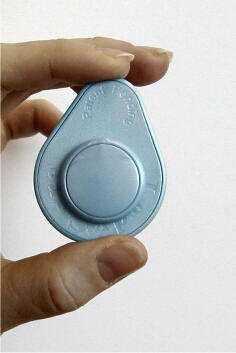 Fig 1: a) The LadyCare device. Designed for attachment to the underwear by magnetic force. The LC contains a 20mm x 5mm, iron neodymium-boron magnet of approximately 2,000 gauss power. 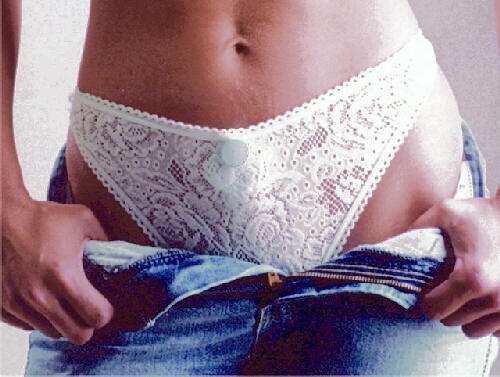 b) The LC attaching securely with the force of the magnetic field (manufacturer’s patent).

How do magnetic fields relieve pain?

As long ago as 1792, Galvani observed that injured tissues generated small electrical currents. Becker measured these injury currents in bone and others have measured them in injured soft tissue (Wolcott et al, 1969). Electrical stimulation has been used to facilitate wound healing for more than 30 years (Carey & Lepley, 1962). The beneficial effect of static magnets may be due to promotion of the so-called injury current that is generated rapidly at a wound site after injury.

Eccles N.K (2005). A Critical review of randomised control trials of static magnets for pain relief. The Journal of Alternative and Complementary Medicine, 11 (3), 495-509

Eccles N.K (2005). A Randomized, Double-Blinded, Placebo-Controlled Pilot Study to Investigate the Effectiveness of a Static Magnet to Relieve Dysmenorrhea. Accepted for publication. Journal of Alternative and Complementary medicne, 11 (4): pages to be confirmed.

Hansen KM. (1938) Some observations with a view to possible influence of magnetism upon the human organism. Acta Med Scand, 97:339-64.

Jauchem JR, Merritt JH (1991). The epidemiology of exposure to electromagnetic fields: an overview of the recent literature. J Clin Epidemiol, 44:895-906.

Wever R. (1973) Human circadian rhythms under the influence of weak electric fields and the different aspects of these studies. Int J Biometeor,17:227-32.