As we interact with our environment, there are definite changes in our epigenetic profile. This means that information from our surroundings, (such as interactions with society and culture, the use of internet, communication with people, reading etc.) is reflected on how our genes are ultimately expressed. Researchers have shown that monozygotic (identical) twins who have been exposed to different environments have different epigenetic characteristics (1).

What happens is that information from the environment has an impact on DNA methylation and it changes the expression of factors such as 5-methylcytosine, (the methylated version of cytosine, which is involved in the regulation of gene transcription). An altered DNA methylation profile translates into health consequences (good or bad), depending on several other factors.

We know that methylation (and 5-methylcytosine function) decreases with age (2). Although this process is variable and some individuals may display a lesser degree of deterioration compared to others, it has been suggested by many researchers that maintaining DNA methylation is crucial to health. For example, it was shown that age-related decrease in methylation can cause adult somatic cells to revert back to a stem-cell like status, which then predisposes to cancer, (because the now young stem cells grow uncontrollably). But the issue of methylation is quite complicated because reduced methylation can have health benefits too.

In any case, it is known that certain nutrients or compounds may modulate, (increase or decrease) DNA methylation. One such example are the methyl donor molecules, (compounds that carry and incorporate methyl groups onto the DNA molecule) betaine, methionine and choline. On the other hand, selenium, polyphenols and bioflavonoids (e.g. epigallocatechin-3-gallate, genistein, quercetin and fisetin) reduce methylation. A reduced methylation is not necessarily a bad thing, as it is the balance of methylation that counts. By following a well-adjusted mix of both promoting and decreasing factors, the body is allowed to make its own choices according to local needs, for optimum result. It is not a matter of just indiscriminately using pro-methylation compounds, expecting to inevitably experience health benefits. Biology is not as simple as that, but the mechanisms rely on several mutually-balancing effects. There is significant cross-talk between cell metabolism and the epigenome, which balances homoeostasis for normal cell function. This depends on the ratio of hyper vs hypo methylation compounds, such as methionine and serine, as well as idebenone and SAMe (S-adenosyl-methionine, or SAM) which then affect ATP synthesis and function (3)- see Figure 1.

Figure 1: The relationship between methionine, SAMe, ATP (adenosine tri-phosphate), and methylation. Other processes are also involved and the entire reaction can proceed or slow down depending on the different factors. This shows that SAMe depends on ATP in order to function effectively, therefore some practitioners advise adding ATP supplements to a methylation regime (3). After all SAMe is a molecule composed of adenosine, (which is derived from ATP) and methionine.

In a paper, researches claimed that supplementation with SAMe and polyunsaturated fatty acids (PUFA), may be useful in reducing the impact of mild dementia (4). The researchers focused on dietary supplementation as applied both in pre-dementia syndromes and Alzheimer’s disease.

They found that SAMe has a critical role to play as a neuroprotective nutritional supplement and that it works much better if it is used in association with other compounds, particularly PUFA. The use of SAMe can also improve the mechanisms leading to the reprogramming of stem cells (5). This is achieved by enhancing the methylation and by fine tuning the processes involved in stem cell function.

By the way, SAMe is also used against depression. It can be as effective as prescription-only antidepressants (6) and several reports confirm this action. SAMe is involved in several biochemical reactions (such as those with methylate folate), donating methyl groups in order to methylate neurotransmitters (see figure 2).

It has been shown that a low concentration of SAMe in the cerebrospinal fluids is also associated with reduced levels of neurotransmitters; this is one of the biochemical reasons leading to clinical depression (7). 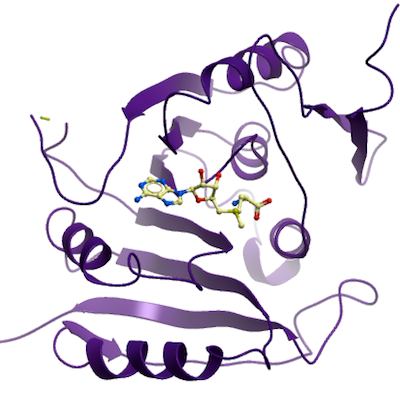 Figure 2: Human methyltransferase, (the enzyme that catalyses the transfer of methyl groups), in complex with SAMe. This image hints at the 3-D complexity of the molecules involved. In reality, the enzyme is much more complicated, functioning in 4 dimensions (over-time) and, like all other enzymes it is more accurately described as a ‘cloud-like’ ensemble structure.

In another study, idebenone, a synthetic equivalent of the co-enzyme Q10, (see figure 3) in association with resveratrol, improved DNA methylation and mitochondrial function in a model of Parkinson’s disease. The relevance of this finding is that it is best to use a suitable combination of compounds in order to address any given health problem. Many research projects repeatedly highlight the importance of using combinations rather than single agents (8).

Idebenone has been shown to be involved in both hyper and hypo methylation of genes, which results in regulated apoptosis and antioxidant protection. This, once again shows that a health benefit related to methylation may be achieved not only through high or through low methylation but through a balanced action (9).

I mentioned several times that research shows health benefits through both up and down regulation of methylation. So where does this leave us with regards to offering clinical advice on methylation supplements? Should we aim for a low dose, a high dose, or a compromise between the two?

A few facts may seem relevant: The commonly-recommended methylation-enhancer compounds (such as SAMe, idebenone, methionine, etc.) appear to be valid suggestions, but this does not mean that by taking a very high dose we should also expect a corresponding very beneficial result. A moderate dose in association with other supplements and a balanced diet is a more reasonable option.

If we provide our body with the raw materials, then nature will do the rest. But it is also important to maintain a good and active interest in our surroundings, (which includes integration with technology, social interactions and increased cognitive lifestyle). The information we are exposed to then results in suitable modifications of the DNA via methylation and this leads to adaptations in our metabolism, making us healthier and better able to cope with the rigours of aging.