Men: How to Enhance Your Sex Life Naturally and Safely

Up until the late 1990’s, male impotence was a taboo subject and few medications had been developed to treat it. But with the advent of the much publicized and heavily marketed drug Viagra®, a solution − although a temporary and imperfect one − was finally available for the deeply disturbing condition that became commonly known as ‘erectile dysfunction’ (ED).  Although Viagra® is a first-line treatment for ED, it’s not a ‘miracle pill’ − it comes with a list of potential safety issues and side effects, is ineffective in complex cases, and doesn’t permanently correct the underlying factors that lead to the development of the condition. It’s only a short-term (i.e., two to three hours) fix. The good news is, there’s a safe but potent alternative − an innovative product called Vigor-Pro™ that contains multiple ingredients which act synergistically to improve the physiological processes crucial to healthy erectile function while also exerting positive effects throughout the body.

Vigor-Pro™: An Effective Alternative to Drugs for a Common Problem

Research shows that the overall prevalence of ED worldwide is 16 percent, (1) but that the prevalence increases with age, affecting 40 percent of men over the age of 70. (1) In addition to aging men, those with co-existing medical conditions such as cardiovascular disease, hypertension, diabetes and depression are more likely to develop ED, as are smokers and the obese. Because of the relatively high incidence of the condition in older men, especially those with certain diseases, safe and effective treatments are needed.

As mentioned, the approval of Viagra® (generic name ‘sildenafil’ – we will use the terms interchangeably in this article) in 1998 revolutionized the treatment of male sexual dysfunction. By blocking an enzyme, phosphodiesterase type 5 (PDE5), Viagra® and similar drugs such as Cialis® and Levitra®, which entered the market in the 2000’s, work by relaxing arteries, which increases penile blood flow and facilitates initiating and sustaining erections.

But these PDE5-inhibitors have several shortcomings: (1) they function by only one mechanism (enzyme inhibition to enhance blood flow); (2) their effects are temporary (a few hours) without permanent correction of underlying physiological issues; (3) the cost can be high without insurance (although Sildenafil-Pro™ is priced at a reasonable $14.99 for 10 x 100 mg tablets); (4) side effects can range from skin flushing to vision loss; and (5) they aren’t effective in all men, especially those with co-existing diseases such as diabetes, cardiovascular and hypertension.

It’s clear that safe alternatives to drugs are needed − treatments that address and correct, for the long term, the underlying medical problems contributing to ED. Vigor-Pro™ provides that safe and effective alternative; its eight ingredients improve, by different mechanisms, several aspects of sexual function, as well as provide benefits to overall health. The product contains two derivatives of mitochondrial energy co-factor L-carnitine, two powerful antioxidants, three herbs used in traditional Chinese and Ayurvedic medicine, and zinc, all of which combine for a powerful performance-enhancing effect. Let’s examine below each of these ingredients individually.

L-carnitine, a naturally occurring substance synthesized in the body and consumed in the diet, is an important co-factor for the transport of long-chain fatty acids into the mitochondria to facilitate cellular energy production. Carnitine metabolism is important throughout the body and plays a role in male sexual health. Acetyl-l carnitine (ALC) and propionyl-l-carnitine (PLC) are two analogs of L-carnitine, each with actions and benefits. PLC plays an important role in male sexual function by activating enzymes involved in the synthesis of nitric oxide from the amino acid L-arginine in endothelial cells (cells that line the interior of blood vessels). (2) Nitric oxide is important to the signaling pathways that stimulate blood flow to facilitate erections, the same pathways targeted by Viagra® and other PDE5-inhibitors. Healthy blood flow is essential to both erectile and cardiovascular function, and nitric oxide acts as a potent vasodilator, enabling blood vessels to relax and expand to promote circulation to vital parts of the body. Its production declines with age, which hinders the ability of blood vessels to dilate in response to the body’s need for increased blood flow, resulting in the development of conditions such as cardiovascular disease, diabetes, and ED. Natural compounds such as PLC have been shown to enhance nitric oxide synthesis which promotes blood vessel elasticity and blood flow.

[Note: Nitric-Pro™ is a product in powder form containing precursor L-arginine which can also be used to boost nitric oxide production.]

Research shows that serum carnitine levels are significantly decreased in men with ED who do not respond to Viagra®, (3) and in clinical studies, carnitine analogs PLC and ALC have been shown to improve erectile function in these patients. In one study, men with diabetes-related ED who were sildenafil (Viagra®) non-responders received either PLC (2 g/day) plus sildenafil (50 mg twice a week) or sildenafil only. After one month, a significant percentage of patients in the PLC plus sildenafil group reported improved erections and a greater number of successful intercourse attempts compared with the sildenafil-only group. (4)

In a similar study on men who had undergone prostate removal surgery, one group of patients received PLC (2 g/day), ALC (2g/day), and sildenafil (100 mg as needed); a second group received sildenafil alone; and a third group received placebo. The best outcomes in restoring erectile function were obtained in the PLC, ALC, and sildenafil group. (5) Though neither study included a carnitines-only group, which would have been informative, both did show that adding ALC and PLC to a standard Viagra® regimen restored sexual potency. Another study (which did evaluate a carnitines-only group) compared the effects of testosterone, the primary male sex hormone linked to sexual health, to PLC plus ALC in treating symptoms of male aging, including ED. Patients (66 years old, on average) received one of three treatments: (1) testosterone (160 mg/day); (2) PLC (2 g/day) and ALC (2g/day); or (3) placebo for six months. By the end of the study, the combination of PLC and ALC improved erections more significantly than testosterone. (6) This is an important finding on the efficacy of ALC and PLC to treat ED, perhaps indicating that patients in the first two studies we examined could have dropped Viagra® from their regimens and still have achieved enhanced erectile function.

Vigor-Pro™ contains 1 g each of both ALC and PLC, an ample dose comparable to those used in these studies and a level shown to have therapeutic effects. It should be noted that these carnitine analogs not only act on the male reproductive system but provide general health benefits as well. ALC is a cognitive enhancer, improving memory, learning, and mood. PLC supports healthy endothelial function and blood flow, and enhances energy metabolism, cardiac function, and physical performance.

Vigor-Pro™ contains two powerful antioxidants. The first, alpha-lipoic acid (ALA), is manufactured endogenously, but also obtained from certain foods. ALA neutralizes oxygen free radicals, binds metal ions, regenerates other antioxidants in the body, and like ALC, promotes mitochondrial energy production. Recent studies have shown that ALA may also be useful in treating male reproductive disorders, such diabetes-induced ED and infertility. (7) Acting by a similar mechanism as PLC, ALA stimulates the synthesis of nitric oxide from L-arginine. (8) One study found that the ED drug alprostadil in combination with ALA (60 mg alprostadil and 600 mg ALA, given intravenously once per day for two weeks) improved both endothelial and erectile function in diabetes patients with ED. (9)

Another study compared ALA (600 mg daily by injection for one week, followed by 600 mg orally) to testosterone (50 mg daily transdermally) in the treatment of diabetes-related ED. Both groups reported improved erectile function by the conclusion of the 12-week study, but the ALA group also demonstrated reduced body mass index (i.e., weight loss), lowered hemoglobin A1C (i.e., improved blood sugar control), and lowered cholesterol. (10) These beneficial system-wide effects are not seen with Viagra® or any other ED drug.

The second antioxidant, superoxide dismutase (SOD), is an enzyme that reduces oxidative stress, promotes longevity, and protects against a variety of diseases. SOD is present in relatively high concentrations in the testes (11) and plays a role in male fertility. (11,12) Vigor-Pro™ contains a concentrated source of SOD known as TetraSOD®, derived from a marine phytoplankton strain grown under patent-pending technology.

Vigor-Pro™ also contains three herbal ingredients used for centuries in traditional Chinese and Ayurvedic Indian medicine to improve male sexual performance. The first, Mucuna pruriens, also known as ‘velvet bean’ is an Ayurvedic medicinal plant used to treat Parkinson’s and diabetes, as well as to enhance libido, fertility, and sexual function. One researcher has labeled it a “sexual invigorator,” (13) a designation borne out by several animal studies that show significant effects in boosting libido and potency. Although L-DOPA (levodopa), the precursor of the neurotransmitter dopamine, is often thought to be main active ingredient responsible for its sexual enhancement properties, it appears that other constituents may play a role. For example, in one study, a particular extract of M. pruriens that was chemically analyzed and shown to be free of  L-DOPA contained other components, identified as catechol and polyphenols, that up-regulated the expression of particular genes linked to nitric oxide production. When administered to male rats with diabetes-related ED, this extract improved sexual behavior and prevented penile tissue deterioration due to diabetes. (14) This protective action on erectile tissue may be due to M. pruriens’ strong antioxidant properties against diabetes-induced oxidative stress. (15) M. pruriens has also been shown to reduce or even reverse age-related penile nerve damage to improve erectile function. (16) Other research has found that M. pruriens inhibits an enzyme known as Rho-kinase 2 that causes contraction of penile smooth muscle, impeding erections. By blocking this enzyme, M. pruriens enables erectile tissue to relax, improving sexual function. (17)

Another Ayurvedic medicinal plant, Bacopa Monnieri, also known as ‘Brahmi,’ has been used as a nootropic (cognitive enhancer) to treat neurological disorders since ancient times. B. Monnieri is still widely used today to improve intelligence, memory, and learning.  As far as ‘ale sexual health, B. Monnieri contains a variety of bioactive components that reduce oxidative stress and produce vasodilation via the nitric oxide pathway (18,19), similarly to other ingredients in Vigor-Pro™.

He Shou Wu (Polygonum multiflorum Thunb.) also known as ‘Fo-Ti,’ is another traditional herbal medicine, used for centuries in China. Its name translates to “black-haired Mr. He,” apparently due to the rejuvenating effects on its discoverer (i.e., hair growth, hair blackening, and enhanced virility). The plant contains dozens of chemical compounds and has been used to treat a wide variety of conditions, including diabetes, cancer, heart disease, and neurodegenerative diseases.

How to Use Multi-ingredient Vigor-Pro™

We have just examined the effect of each of Vigor-Pro™’s eight ingredients in safely and effectively promoting male sexual function. Combined, they exert a potent effect. The usual dose is four capsules, once or twice a day with a large glass of water. If also supplementing with Nitric-Pro™, you may wish to start with fewer capsules, evaluate the effect, and adjust as necessary. Vigor-Pro™’s ingredients act synergistically to not only enhance erectile function, but also provide benefits throughout the body, including improvements in endothelial health and cardiac function; physical and cognitive performance; mitochondrial energy production; antioxidant protection; and more. Vigor-Pro™ is a win-win alternative to drugs in boosting your sexual performance as well as your general health. 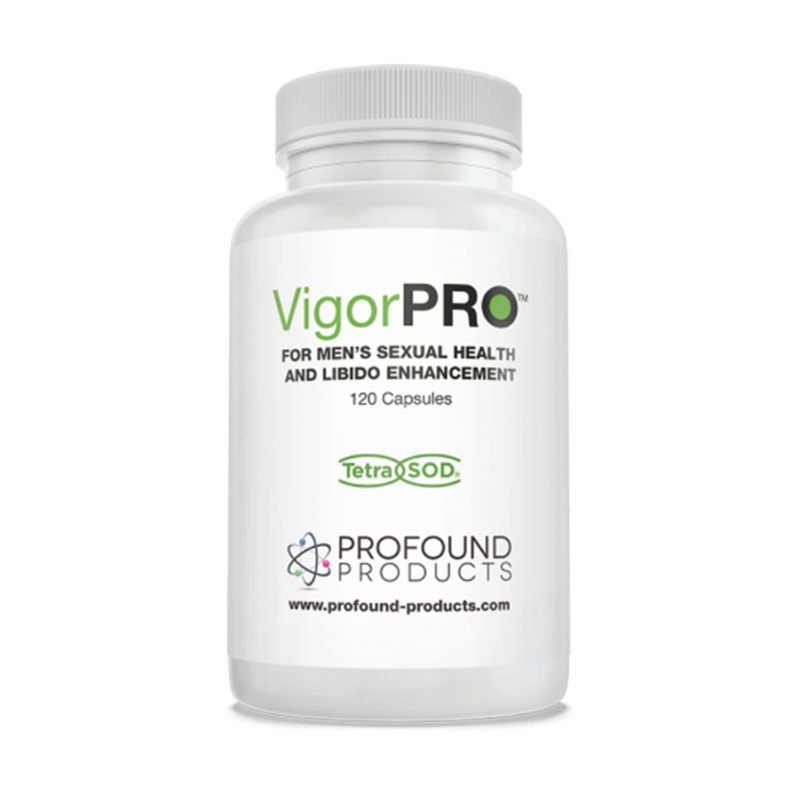