Idebenone (IDB) is a synthetic analog (variant) of one of life’s most essential biochemicals, coenzyme Q10 (CoQ10). CoQ10 is an important antioxidant component of the lipid (fatty) membranes that surround all cells, as well as the lipid membranes surrounding the various organelles (“little organs”), such as mitochondria and microsomes, inside cells.

CoQ10 is also an important member of the “Electron Transport Chain” (ETC) within mitochondria, which are the “power plants” of the cell. Most of the oxygen we breathe is used inside the ETC to produce much of the ATP bioenergy that powers virtually every activity of our cells and bodies.

Without CoQ10, or a good substitute, human life quickly ends, and IDB is a “better CoQ10” that has been extensively researched the past 15 years.

When blood flow is seriously reduced to any part of the body, as in a heart attack, stroke, trauma, shock, or chronic poor blood circulation- cellular/ mitochondrial oxygen (O2) levels quickly drop in the affected region. Yet because O2 is seven to eight times more soluble in the lipid zones of cell membrane, compared to the watery compartments of the cell, there is still sufficient O2 remaining in the membranes of cells and organelles, as well as in the ETC, to auto-oxidize CoQ10. As the CoQ10 auto-oxidizes, hydrogen peroxide, superoxide and hydroxl free radicals are rapidly formed in massive numbers. These free radicals quickly damage cell/ organelle structure and function, as well as rapidly halt ATP energy generation by the ETC.

Brain and spinal cord cells are especially prone to such damage, and may be irreparably damaged or even destroyed within minutes.

Why Idebenone is superior to CoQ10

Enter IDB to the rescue! Studies have shown that under the same cellular low oxygen conditions that cause CoQ10 to act as a pro-oxidant producer of damaging free radicals, IDB prevents the free radical dam-age and maintains relatively normal cell ATP levels. In short, while IDB can effectively substitute for CoQ10’s positive and life essential functions, it doesn’t have CoQ10’s free radical producing and energy crashing “dark side” which occurs under hypoxic (low O2) conditions.

The mitochondrial power plants produce over 90% of all cellular ATP bioenergy. They are also generally the richest sites in CoQ10 (or IDB). Mitochondrial DNA (mtDNA) allows mitochondria to reproduce them-selves.

While the DNA in a cell nucleus comes from both our parents, mtDNA comes exclusively from our mother’s mtDNA.

There are typically two or three copies of mtDNA in each mitochondrion, with average 1000 mitochondria per cell. Because mtDNA exists in the “heart of the fiery furnace” where electron “sparks” are constantly leaking as ATP is produced in the ETC, mtDNA is far more prone to free radical electron damage than is the DNA in our cell nuclei that contains the “blueprint” for our entire organism.

At the same time, the repair capacity of mtDNA is much less than that of our cell nucleus DNA. As a consequence, over the course of a lifetime our mtDNA becomes ever more damaged, and the mitochondria produced therefrom become ever more ineffective at energy generation. Studies comparing heart tissue from young people with that from elderly people have shown almost no significant mitochondrial dysfunction in young hearts, with significant, often severe mitochondrial dysfunction in elderly hearts.

The cells that are most susceptible to mitochondrial energy depletion with advancing age are the brain, skeletal muscle and heart muscle cells. IDB thus offers a prime anti-aging effect here in several ways. Unlike CoQ10, even under the low O2 conditions that may occur periodically over a lifetime, IDB will serve as a powerful mitochondrial free radical quencher, lessening the ever-increasing mtDNA damage that occurs with age.

IDB will work even better than CoQ10 within the ETC to keep energy production high, even under hypoxic conditions. This is especially critical to brain and heart cells that may be rapidly damaged during low ATP production episodes that occur due to poor tissue oxygenation.

Iron is a “dual edged sword.” It is absolutely essential for life, it plays a central role in ATP generation in the ETC. Yet iron can also be a powerful initiator of free radical production and cell structural damage, especially under low O2 conditions.

This occurs, for example, during stroke, and during the gradual onset of Parkinson’s disease. Studies have shown that IDB can tightly couple oxidation to energy production. This prevents iron ions from wastefully and toxically, diverting O2 to producing free radicals inside the mitochondria, instead of energy.

Studies have shown that IDB can almost completely eliminate this, diverting 10% of cellular O2 away from toxic iron induced free radical generation, to beneficial ATP energy production under hypoxic conditions.

Mild cellular hypoxia can occur even from intense exercise, or even from mild exercise done by out of shape “couch potatoes.”

A variety of studies using brain cells, (animal and humans) have shown IDB’s ability to enhance brain structure and function.

Human and animal studies have demonstrated that IDB can enhance serotonin production, even under far less than optimal conditions, as e.g. with a very low tryptophan diet, or in patients with cerebrovascular dementia.

IDB has enhanced cholinergic nerve function and consequent learning ability even under hypoxic conditions, or when an anti-cholinergic drug (Scopolamine) was administered. IDB has increased cellular catecholamine (dopamine, adrenalin and noradrenanlin) production by enhancing cellular uptake of the precursor amino-acid tyrosine.

IDB has been shown to enhance general cerebral metabolism, lessen the damage from strokes, and has been used to treat Alzheimer’s and other dementias.

And like the original nootropic drug; piracetam, IDB has been shown to promote information transfer across the corpus callosum, the membrane separating the right and left brain hemispheres.

This is turn may promote the union/ integration of the logical (yang) and intuitive (yin) halves of the brain/ mind.

As our organs age or are damaged, we age and are damaged. Over a lifetime, blood flow to our organs diminishes due to arteriosclerosis and less efficient heart pumping. This reduces O2 dependent energy production needed for repair, reproduction and normal function of the organ cells. Free radical damage accumulates over time, leaving ever more dead, dying or dysfunctional cells within organs.

At some point a critical threshold is reached when too many cells within an organ are dysfunctional, and they can no longer sustain the organ’s life and function. Then the organ- heart, brain, liver etc. fails.

IDB protects organs in many ways, it cushions them against hypoxic (low O2) and/ or ischemic (poor blood flow) damage. IDB enhances both normal and hypoxic ATP energy generation. Each cell in our organs must produce the energy it needs for life and health, cells cannot “borrow” energy from each other.

IDB is a powerful antioxidant, more so than CoQ10, and in some studies is 30 to 100 times more effective, than vitamin E or vinpocetine as a free radical quencher within the brain cells.

A 1995 study in the Journal of Transplantation compared the organ preserving effects of CoQ10 and IDB. The study measured various factors, such as free radical membrane lipid damage, cell protein damage and cellular energy production under hypoxia conditions.

The results showed IDB to be dramatically more effective than CoQ10 at preserving liver tissue under conditions identical to that endured by whole livers “harvested” and stored (briefly) before transplant to another person.

Glutamic acid and aspartic acid are the two chief EAA neurotransmitters in the human brain. Without them we would be “mental vegetables.”

Yet under certain conditions, e.g. stroke or traumatic brain injury- excessive amounts of EAA’s accumulate in the fluid surrounding brain cells, causing damage and even death to nerve and glial cells through free radical mechanisms.

EAA toxicity is at least partly responsible for the neurotoxicity of the recreational drug “Ecstasy or MDMA.” Studies over the past 30 years have also shown that excessive dietary intake of EAA’s may also damage brain structure/ function, especially in children or EAA sensitive adults.

In studies with various types of nerve cell, as well as oligodendroglial cells (which make up the protective myelin sheaths surrounding many nerves, the so-called “white matter” of the brain). IDB has shown dramatic protective effects against glutamate toxicity.

With all these powers, IDB should now rightfully take its place in the first rank of anti-aging/ nootropic/ energizer drugs, along with Hydergine ®, Piracetam, Vinpocetine, Deprenyl and GH3/ KH3 (and it’s one of my personal favorites!) So who can benefit from Idebenone? The answers are,

Because of its synergy with other life extension drugs, those also taking any or all of Hydergine ®, Piracetam (and its analogues), vinpocetine, deprenyl, GH3/ KH3 may benefit from even just one 45mg tablet a day, especially if taken regularly on a long-term basis. Because Idebenone is fat soluble, it is best taken with a fat rich meal, or with lipid absorption enhancing agents such as lecithin or phosphatidyl choline.

Numerous studies have shown that Idebenone is well distributed through-out the body after absorption, accumulating in cellular and organelle membranes, as well as in the electron transport chain, exactly where it does the most good!

It is generally recognised that the original producer of Idebenone; Takeda of Japan is still the best quality. Therefore, in keeping with the IAS policy of quality first. The brand offered is Mnesis by Takeda. 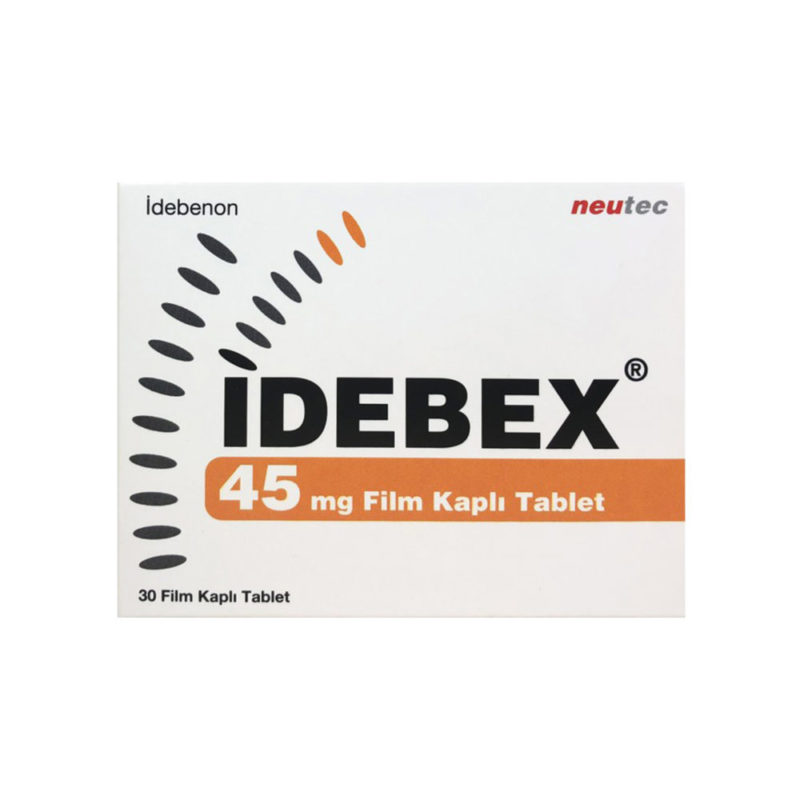