The National Institute on Aging (NIA) announced the final results of testing from three government labs regarding the patented antioxidant nordihydroguaiaretic acid (NDGA). All three labs agreed that NDGA extended lifespan by a resounding 12% in mice (1) (see Figure 1). 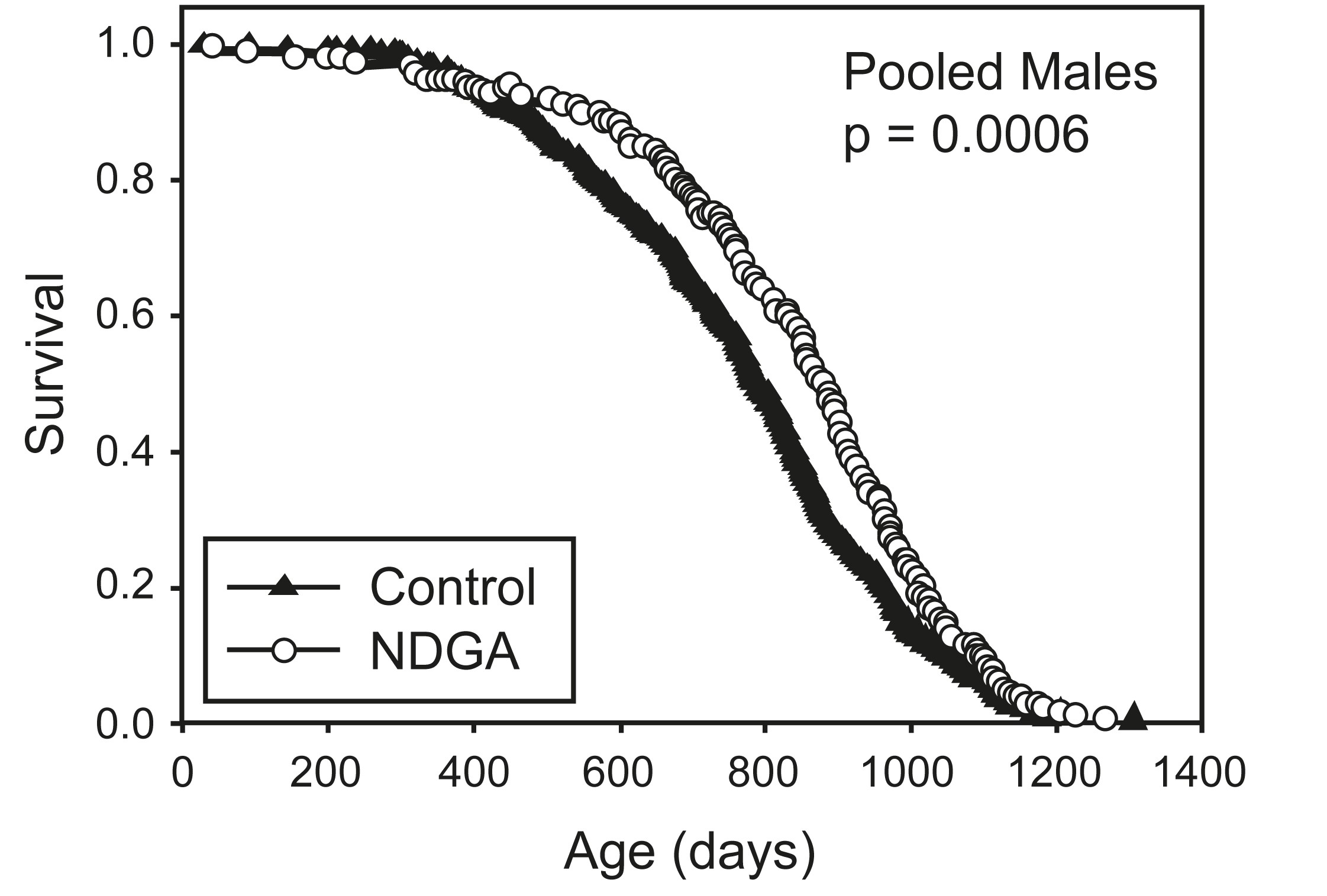 Figure 1: The survival plots for male mice treated with nordihydroguaiaretic acid (NDGA). Each symbol represents an individual mouse dying at the age indicated. The log-rank test was used to calculate p-values for differences between treated and control mice. (1)

When some read this astounding news, they were skeptical. With a note of cynicism and doubt in their voices, they said this report was probably hyperbole and the Federal government is not to be trusted. Yet these same three government labs had also conducted lifespan studies with much-hyped anti-aging remedies, resveratrol, curcumin, green tea, oxaloacetic acid and triglyceride oil (2) and found that these five supplements did not extend lifespan in mice.

During the 1980s, researchers extensively tested NDGA in humans, mice and dogs. Results indicated that NDGA extended lifespan in a variety of mammals. Even the US Patent and Trademark Office approved these results and granted a patent to Dr. Richard Lippman for NDGA, (no. 4,695,590) as part of his unique formula, a formula he developed to slow aging which was based on his extensive free radical research (3).

Before Dr. Lippman was awarded a US patent on NDGA, several attorneys voiced skepticism. In firm language, they stated that every law school student knows that two types of patents are never granted: a patent on a perpetual motion machine and a patent on a fountain-of-youth remedy. Apparently, Dr. Lippman convinced patent examiners that his clinical human, mice and dog studies of NDGA were sufficient to warrant a patent with claims to retard human aging. These studies were also sufficient for the drug licensing authorities of Sweden and Italy to grant Dr. Lippman marketing rights to sell NDGA under the name ‘Aging Control Formula 228’ (ACF228®).

ACF228® Is Based on Extensive Free Radical Research

Today, we know free radicals are not antiwar activists out on bail. But when Dr. Richard Lippman was doing research in Sweden many years ago, most people thought the term ‘free radicals’ referred to some kind of hippie politics.

Dr. Lippman first learned about the free radical theory of aging as an undergraduate student. When he began doing graduate research work in cell biology, he and his colleagues held conferences at Pharmacia-Upjohn and the University of Uppsala to discuss the exciting findings of Professor Denham Harman, whose experimental work at the University of Nebraska in the 1950s showed that the life spans of mice could be extended 50% with special antioxidant supplementation. The press and public responded; “So what?”

However, Sweden is well known in science and engineering for its industrial and technical advances, so Dr. Lippman became the leader of a large medical staff that encouraged this progressive research.

Dr. Lippman wanted to take Professor Harman’s work one-step further and explore the relationship between free radicals and aging. He turned to Professor Sven Brolin, chair of the University of Uppsala’s Department of Medical Cell Biology and Professor Gunnar Wettermark, chair of the Royal Institute of Technology’s Department of Physical Chemistry, for assistance in raising funds for research.

Dr. Lippman was successful, receiving significant medical and chemical grants from the Swedish Research Council to develop antiaging strategies based on Professor Harman’s groundbreaking discovery of the action of free radicals and the role of radical scavengers (anti-oxidants) in destroying or inhibiting them. The Swedish Research Council financed years of Dr. Lippman’s research at the Royal Institute of Technology in Stockholm and at the University of Uppsala, Scandinavia’s oldest university, which has an anatomy lecture hall built in the 15th century.

Dr. Lippman’s research, into the role that free radicals play in the breakdown of the aging body, led him to develop one of the most potent antioxidant combinations yet known, a unique cocktail containing NDGA, it is called ACF228®.

Dr. Lippman’s normal lab attire—jeans, a khaki shirt, and ostrich leather boots—breaks from the conventional notion of a white-coated scientist. Before his work in antiaging research that made him famous, he ate junk food. Now, a typical lunch for him is salmon sashimi and salad or bi bim bop with a bowl of miso soup. He even developed his own recipe for sugar-free, gluten-free, walnut cinnamon pumpkin muffins.

In speaking, Dr. Lippman presents an easy smile and laugh. He may not look like a typical scientist, but his passion for longevity research is real. His innovative research into free radical pathology helped put antioxidants on the map, in the dictionary and in the supermarket.

Once funding was in place, Dr. Lippman gathered a team of five prominent Swedish scientists to help him develop methods for measuring free radicals and biochemical changes related to aging: Professor Agneta Nilsson, a nutritionist and alternative medical professional with advanced degrees in nursing and teaching; Dr. Ambjörn Ågren, MD, PhD, who had received numerous awards in the field of emergency medicine; Professor Mathius Uhlén, PhD, a civil engineer, molecular biologist, and, later, professor and chair of the Royal Institute of Technology’s Department Molecular Biology; Evald Koitsalu, an engineer and expert in computer hardware and software; and Dr. Kaj Alverstrand, a psychologist and consultant to Volvo.

With these tremendous financial and personnel resources, Dr. Lippman was able to achieve great leaps in the field of antiaging. Indeed, Paul Glenn of the Paul Glenn Foundation for Antiaging Research said that Dr. Lippman’s work was; “light years ahead of everyone else!”

Figure 2: The chemical formula of NDGA

The research team’s first task was to find a cellular model rather than an animal model to test for life extension, since Professor Harman’s model of waiting for mice to grow old and die was costly and took years of patience before the results came in.

The Lippman team had access to many different types of living cells in culture, such as human cells of the heart, brain, liver and central nervous system. In 1980, Lippman invented special probes that would penetrate cell interiors without harming them. For the first time in the history of cell biology, scientists were able to measure free radicals in living cells (4). The first probe, carnitinylmaleate luminol (CML), measured superoxide radicals in live human liver cells. Dr. Lippman and his team went on to test many different combinations of antiaging nutrients.

Developing the formula combinations was a tedious process. Live cells were harvested from biopsies, then separated and kept metabolically alive in special culture dishes heated to a constant 98°F. The live cells were removed as needed by the research team and tested for their health by means such as measurements of adenosine triphosphate (ATP), the power source or ‘gasoline’ of most cell activities.

Then the cell cultures were impregnated with special CML probes and incubated with different mixtures of vitamins and nutrients. Dr. Lippman’s team eventually tested 227 different mixtures to find an optimal mixture with pronounced longevity-promoting characteristics. Mixture number 228 was found to work best and this and several other promising mixtures such as 223 were tested further in mice and human volunteers. Now named ACF228®, the mixture proved successful in extending mice health and life spans, (see figure 3) 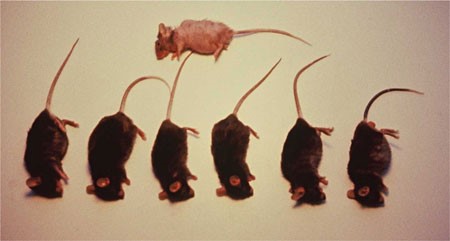 The team published its results in more than twenty prominent medical journals. The work astounded the Swedish scientific community and Dr. Lippman was nominated for a Nobel Prize in Medicine in 1996.

Further tests were conducted on hundreds of human volunteers recruited from several Swedish hospitals (3). The volunteers were tested to establish their normal levels of fatty-acid peroxides, which are free-radical downstream products and then were fed varying amounts of ACF228®. Once again, the mixture known as ACF228® caused peroxide levels to decline the fastest. Dr. Lippman and his researchers performed other human tests that indicated ACF228® also had beneficial effects on the skin and sexual function (3).

“We found that the ACF228® formula truly is beneficial,” Dr. Lippman says. “It was especially helpful for middle-aged and older people; their liver function became like that of teenagers. Often people experience reduced liver function as they age, especially if they have abused their bodies with heavy consumption of alcohol and a high sugar diet, causing metabolic syndrome (5). This nutrient mix offers protection from a multitude of free radicals in the body.”

Ultimately, the ACF228® formula was approved for use by regulatory agencies in both Sweden and Italy and then became patented in the United States.

This helps to destroy the most common radical, the superoxide anion, (a negative Ion) radical through a process known as quenching.

This helps to stop fatty acids, (the essential building blocks of all cells) from becoming radicalized.#

This is a second-tier radical scavenger renowned for helping recharge the cells’ antioxidant reserves. It also bonds to the toxic metal mercury and other heavy metals.

This essential enzyme is critical to deactivating and converting hydrogen peroxide to ordinary water. Insufficient catalase increases the likelihood of hydroxyl radicals.

This is a premier anti-glycator (anti-cross-linker) that helps to counter the hardening of the lens of the eye and improves arterial elasticity.

This is the premier extractor of heavy metals, through a process called ‘chelation.’

These are essential methylation vitamins for any serious antiaging program.

Indeed, based on these criteria, Dr. Lippman could rest easy. But he isn’t resting. The energetic, youthful-looking father of three sons and four grandchildren still goes to his lab daily. And what is this Nobel Prize nominee working on today for the betterment of humankind tomorrow? Dr. Lippman continues his medical research, focusing on improved methods of delivering important vitamins and hormones, including transdermal delivery methods.

“The response to ACF228® worldwide has been great and that is indeed gratifying,” says Dr. Lippman. “You know, we should all be able to live to 120 years and perhaps even beyond. We don’t because of the free radical damage and declining repair hormones our cellular systems sustain. Our brains shrink, our arteries become hardened and our liver function declines, mostly because of free radical pathology and damaged endocrine glands. Aging is the ultimate disease. If ACF228®, with its unique blend of natural ingredients can help people to prevent their premature onset, then I will have lived my life knowing that it has been a success.”

Aging is the ultimate disease; if ACF228, with its unique blend of natural ingredients can help people to prevent their premature onset, then I will have lived my life knowing that it has been a success.”