Insulin resistance is the central metabolic defect in a cluster of disorders now referred to as Syndrome X. This cluster of diseases includes Type II diabetes mellitus, obesity, hyperinsulinemia, hypertension, hyperlipidemia, and atherosclerosis. This syndrome was first described (in Russian) by Professor Vladimir Dilman in 1955. Today, Dilman’s name is rarely mentioned as the first to have appreciated the central unifying mechanism in these diseases. I’ve described Dilman’s concepts and the disease-producing mechanism in previous articles on The Neuroendocrine Theory of Aging, published in previous issues of Vitamin Research News (www.vrp.com).

Acarbose (Glucobay ® in Europe or Precose ® in the USA), is a recently approved drug for use in (1) insulin-dependant diabetes mellitus (Type I), (2) adult-onset diabetes mellitus (AODM, or Type II), and (3) those who suffer from “impaired glucose tolerance.” As I’ve previously pointed out (IAS Bulletin Spring 2000 and IAS Bulletin 1996), virtually everyone over the age of 35 is probably functionally glucose intolerant to some degree (Fig. 1).

Using even the strictest orthodox criteria, it is estimated that up to 20% of Caucasians between the ages of 65 and 75 years have Type II Diabetes-and an additional 23% have “impaired glucose tolerance” (Babasa-Lhoret and Chiasson, 1998).

To understand how acarbose works, we need to review a few basics of carbohydrate metabolism. Starches and complex sugars are broken down in the digestive tract into simple sugars, which are then absorbed by the body (in the lower small intestine and colon). These simple sugars are used for energy or stored (as fat). Enzymes are essential to break down the complex carbohydrates into sugars. Certain groups of enzymes are critical to the final steps in the digestion of carbohydrates. One of these groups is known as the alpha-glucosidases. Alpha glucosidases enhance the breakdown of maltose, isomaltose, glucoamylose and sucrose (table sugar) (Fig. 2).

Acarbose acts as a potent competitive inhibitor of intestinal brush border alpha glucosidases that are essential for the breakdown of starches, dextrins, maltose, and sucrose to absorbable monosaccharides (Fig. 3).

Post-meal triglyceride levels are also decreased (probably due to the reduced insulin response) (Clissold and Edwards, 1988). Some scientists believe that post-meal triglyceride levels are as accurate as fasting cholesterol levels in predicting the risk of coronary heart disease (Patsch, et al, 1990; Stampfer, et al, 1996). In addition, reductions in fasting triglycerides have also been reported (Lardinois, et al, 1984; Akazawa, et al, 1982), as well as reductions in low-density lipoproteins (LDL) and increases in high-density lipoproteins (HDL) (Hoffman and Spengler, 1997). Glycosylated hemoglobin (also known as haemoglobin A1c [HbA1c]) is increasingly becoming recognized as a screening and diagnostic test for diabetes. In addition, it is also becoming recognized as a bio-marker of aging, or an indication of biological age. Recently, HbA1c was documented to increase progressively with age in non-diabetic subjects (Fig. 5) (Nuttall, 1999).

Acarbose has been demonstrated in numerous studies to significantly reduce HbA1c (Fig. 6).

The reduction in HbA1c has a number of other beneficial effects, including decreased glycation of glomerular basement membranes, decreased advanced glycosylation end product (AGE) formation in connective tissue, decreased cataract formation, and prevention of neuropathy and retinopathy (Magner and Amatruda, 2000). In addition, of particular significance with respect to the mechanism of aging proposed by the neuroendocrine theory, Balfour and McTavish

(1993) speculated that acarbose might improve insulin sensitivity (as indicated by decreasing fasting blood glucose). Chiasson, et al (1994) also believed acarbose improved insulin sensitivity, based on their finding that patients taking acarbose experienced an upward trend in post-meal C-peptide levels. Furthermore, acarbose appears to prevent or delay the progressive deterioration in pancreatic beta cells that routinely occurs in patients with Type 2 DM (Babasa-Lhoret and Chiasson, 1998). Other benefits of alpha glucosidase inhibitors are their ability to prevent or attenuate diabetic nephropathic lesions (Bischoff, 1995), and one study even reported an improvement in cognitive function in both animals and elderly patients given acarbose! (Stolk, et al, 1997). Because acarbose does not result in hypoglycaemia, it can be safely used by those who suffer from reactive hypoglycaemia – and will probably benefit the condition due to its insulin-modulating properties.

Acarbose as an aid to Weight Loss

Animal studies with acarbose have consistently shown that acarbose has a body weight-lowering action. Balfour and McTavish (1993) reported that acarbose caused a dose-dependent reduction in body weight gain of genetically obese and hyperinsulinemic rats. In higher doses, acarbose even caused a loss in weight (Fig. 7). Although some studies have reported a beneficial effect of alpha glucosidase inhibitors on body weight in humans (Coniff, et al, 1995; Calle-Pascual, et al, 1996; Johnston, et al, 1997; Hoffman and Spengler, 1997 Goto, et al, 1989), the effect was usually small to moderate. In view of the salutary effect that acarbose has on blood sugar, insulin, lipids, and HbA1c, I was at first surprised at the modest weight loss reported by participants in the studies. However, upon reflection, I believe the potential of acarbose as a weight loss agent may have been overlooked, and this apparent paradox can be explained. First, weight loss was a usual finding in the animal studies. There is no good animal model for diabetes with which to test anti-diabetic drugs – so most studies are done on normal (non-diabetic) or obese animals. However, the human studies were quite different, as the overwhelming majority of subjects were diabetic. Diabetics characteristically gain weight, even when under treatment (the major exception is when Metformin, is used, which usually results in loss of body fat). Acarbose, as we have noted above, prevents weight gain, and actually results in modest weight loss. The anti-obesity effect of acarbose becomes apparent when we add the modest amount of weight generally lost, with the amount that patients not on acarbose would have been expected to gain. Another indicator of acarbose’s efficacy in weight control is its demonstrated ability to retard “relapse weight gain” in overweight patients who had lost weight before beginning treatment with acarbose (William Olsson, 1985; William-Olsson, et al, 1985). Consequently, although acarbose helps overt diabetics maintain a stable weight, I believe that people who are not overtly diabetic will derive even greater weight loss benefits than diabetics – paralleling those of the non-diabetic experimental animals.

Acarbose is a very safe drug. Only about 1-2% is absorbed systemically. The most frequent side effects are all due to the unabsorbed carbohydrates, which ferment and can cause excessive and sometimes embarrassing increased gas production, abdominal cramps, bloating and even diarrhea (Fig. 8). These effects can be minimized by taking the lowest effective dose, which is usually just below that which causes the gastrointestinal distress. Continued use usually results in a reduction or resolution of these symptoms. As some tolerance seems to develop, dosages can be increased to my maximum recommended dosage of 300 mg daily (1/2 of the manufacturer’s recommended maximum of 600 mg/day). In 1988, Clissold and Edwards reported that “from the large clinical studies reported to date, acarbose – even after treatment for up to 5 years-does not produce any clinically significant adverse effects on biochemical and haematological parameters”. Balfour and McTavish (1993) reviewed clinical laboratory tests in 6354 patients, and did not find any consistent trend with regard to liver enzyme abnormalities. However, they did find that the liver enzymes SGOT and SGPT were elevated to almost double the upper limit of normal in almost 4% of the patients. Notwithstanding, these enzyme changes were not associated with changes in other hepatic function tests, and the enzyme abnormalities resolved after discontinuation of acarbose. In another large placebo controlled study, 354 patients were evaluated. Doses of acarbose as large as 200 mg three times daily had no toxic effect according to the results of hematologic and biochemical profiles, including liver function tests (Chiasson, et al, 1994). Acarbose is contraindicated in people with inflammatory bowel disease, colonic ulceration or partial intestinal obstruction, predisposition to intestinal obstruction, chronic intestinal disease associated with marked disorders of absorption or digestion, conditions which might be exacerbated by increased intestinal gas formation (like hernias), or impaired hepatic function. People taking the maximum dose (200 mg three times daily) should be “monitored closely, preferably at monthly intervals, for the first six months.”

Acarbose works best when it is combined with food. When taken as a tablet, it is only 1/4 as effective when consumed in powdered form (Fig. 9).

O’dea and Turton (1985) recommended that “acarbose should be marketed as a powder rather than a tablet so that it can be distributed as uniformly as possible through the carbohydrate components of a meal. Alternatively, patients could crush the tablet into a powder and mix it through a meal.” I have found that acarbose is actually quite pleasant-tasting. Consequently, I recommend that it be chewed with food, somewhere in the middle of the meal. I recommend that therapy with acarbose be started with as little as 50 mg daily, gradually advancing the dosage and frequency as tolerance develops, up to a maximum dosage of 100 mg three times daily, chewed with meals.

Is there a Dietary Supplement Equivalent to Acarbose?

Interestingly, several recent studies reported interesting effects of 2-deoxy glucose (2DG) – an integral part of the acarbose molecule (Fig. 10). In one study, the researchers compared the beneficial effects of 2-deoxyglucose with caloric restriction (CR). Caloric restriction is the best tested and most reproducible means of extending the maximum life span of experimental animals. The researchers found that feeding 2-deoxyglucose to experimental animals resulted in many of the benefits of caloric restriction, including lower blood insulin levels, greater insulin sensitivity, and increased resistance to tumors – without restricting calories (Roth, et al, 1999). Using an animal model of Parkinson’s disease, researchers at the University of Kentucky found that both 2DG and caloric restriction exerted striking beneficial effects, including suppression of oxidative stress, preservation of mitochondrial function, and reduction of cell death. Although 2DG is not currently available as a dietary supplement, it may be offered in the future.

I believe that acarbose, like metformin, will become increasingly recognized for its potential caloric-restriction-mimicking anti-aging and anti-obesity effects. In fact, acarbose and metformin can be taken together, potentiating each drug’s beneficial effects. Although the uncomfortable and potentially embarrassing side effects of acarbose cause a significant number of people to discontinue taking it – these effects are generally dose-related and usually decrease over time. 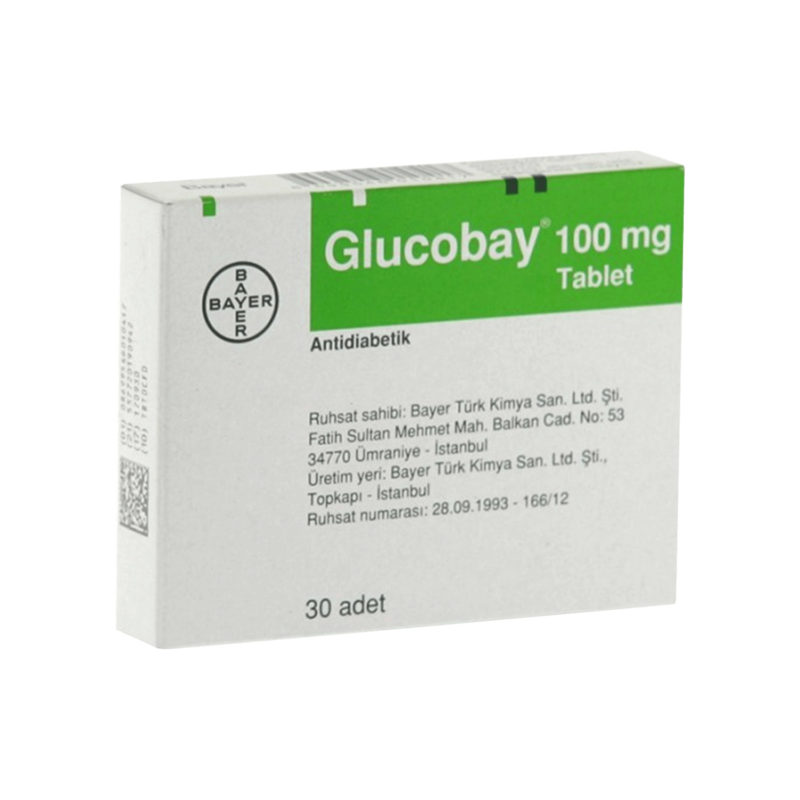